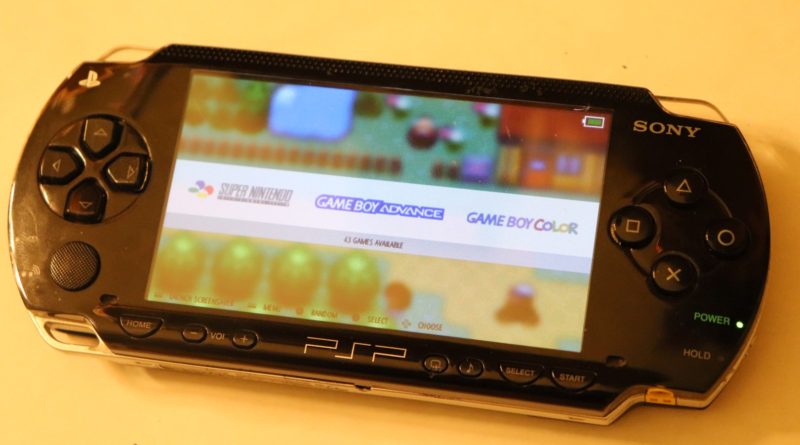 The board now also works with the new Raspberry Pi Zero 2 W. If you want to swap from the original Pi Zero to the Pi Zero 2, check out this video:

This includes an audio filter and amplifier similar to what’s already on the board, and a few more tweaks to make the headphones sound a little better. When headphones are plugged in, the PSP’s internal speakers will be disabled automatically, and will re-enable when the headphones are removed.

The board also includes a connector that allows the microSD to be relocated to the left side of the case. This connector needs to be hand-soldered, and I enlarged the pads to make the process easier.

You can purchase the Headphone board here

All LCD control is integrated into the all-in-one, meaning no external controller is needed. The new LCD connects directly to the FPC-40 connector on the board.
The backlight can be dimmed using the Display button on the PSP. Backlight dimming allows for substantial reduction in power consumption and increased play time.
The GPIO-driven display gives a much clearer and brighter image than the composite LCD in previous builds.
The LCD Runs at the same 480 x 272 resolution as the original PSP

A JST-PH connector is now included and soldered to the board, and makes connecting the battery much simpler and safer. The board has clear labels for battery polarity, since Chinese batteries sometimes have reversed pins on the JST connector. DO NOT attach a battery backwards!
Play while you charge. The power consumption of the system is typically under half an amp (as low as 1/8 amp when the LCD is dimmed), and the charging rate is 1 amp, so you’re able to play while the PSPi is plugged in and charging.
The charging circuit works with 3.7v lithium/lipo batteries only.

Battery voltage is monitored using a 12-bit analog-digital converter. This voltage is constantly averaged and reported using an indicator at the top-right of the LCD. This indicator remains on the LCD at all times. The indicator also shows the charging status when the battery is charging.

The joystick no longer needs to be soldered. Gold-plated pads make use of the attachment method of the original PSP. The pads are thicker than the ones on the original PSP’s motherboard, making the connection more reliable and drift less likely to occur.
True analog input. The joystick input is the same 12-bit analog-digital converter that monitors the battery, and gives the full range of motion in games that support it.
Can also be used as a mouse. I won’t be supplying the code for this (at least initially), but the capability is there.

The board has a pre-installed header for easy soldering of the Pi Zero. It also has gold-plated pogo pins for the SD card and USB port, removing the need to solder those features.
The CSI connector is used for communication with the onboard ICs, and a cable is included with each kit.

Speaker connectors
Speaker wires will attach using 1.0mm JST connectors. The wires will have to be soldered to the speakers initially, but connection and disconnection is easy once the new wires are soldered.

The audio can be switched off using the switch to lower power consumption. This will lower the power usage (a very, very small amount) and give a little extra play time.

2000mAh to 2500mAh batteries should give 3-6 hours of play time, depending on the emulator used and the LCD brightness. The board can run for almost 24 hours at the command prompt when the LCD is dimmed to the lowest level.

Boost converter is no longer part of the board, and this improves efficiency by 10-20%. The microUSB port at the top is powered directly from battery.

Better emergency shutdown circuits
Will kill power once battery is depleted (about 3.5v). This is a hard-wired feature that won’t require software to function. It serves as a backup in case the software features aren’t working for some reason. If the PSPi is powered on with depleted batteries, it will power off almost immediately.

Additional indication LEDs
LED indication on the left side for SD card activity (or any other use for those that know how to code). A second LED is included in PCB 1.2 and above. The LEDs are connected to GPIO 10 and GPIO 20.

Better audio using a LDO-buffer-filter-amplifier setup
Improved audio filtering to get rid of more PWM noise. Very similar to the audio circuit in the Pi 2.
Speakers can be switched off using the switch on the left side (which will lower power consumption and give a little more play time)
Pressing the Home button will exit games in the same manner as pressing Start+Select

Misc Features
I2C pads to attach devices.
All of the PSP’s buttons work.
Volume buttons are able to adjust volume up and down.

Other Features of Version 4

The board will only have RetroPie compatibility at release, but Lakka is built on the same software and can be made compatible.
MicroSD port has been relocated to the bottom of the V4 board.
A connector has been added to the bottom of the board, and will help to add a headphone jack at a later time.
Ability to add a connector and use the original PSP’s battery. This is not a recommended addition since the PSP’s battery has a different operating voltage, but it is available for those that want it. I’ll include the connector and the end user can solder it into position, just let me know you want it included by adding a note to your order.
Solder pads on the bottom to add additional I2C modules. This allows you guys to add RTC modules, or even add additional inputs.

Check it out (and help improve it) on GitHub

The kit is no longer available for purchase. The design files are here.