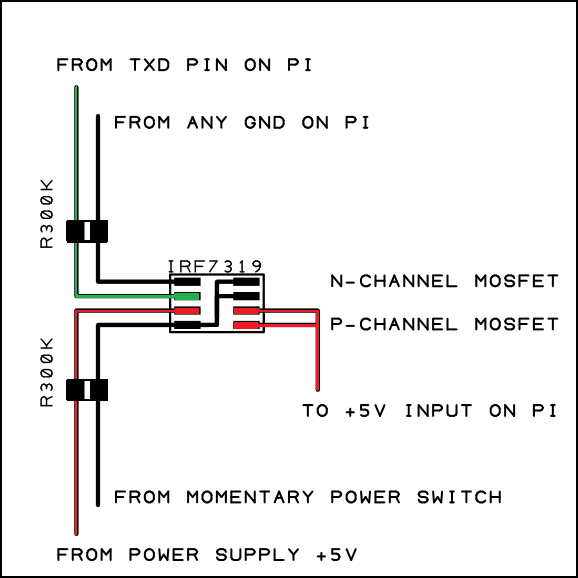 This is a build tutorial for a simple soft power on/off circuit for the Raspberry Pi. For the improved version with emergency shutdown, visit this page.

At the center of this circuit is a dual mosfet, the IRF7319. Using this component, the +5v wire leading to the Pi will be switched on and off. The only other components necessary are 2 resistors with an ohm rating of at least 100k. The circuit has been tested with everything from 100k to 1M ohm and all performed fine.

There are 8 pins on the mosfet, but the outputs have shared pins so there are only 6 connection points.

It’s a dual-mosfet (positive and negative) circuit. Pushing a momentary switch for a second or two turns the power on.

The +5v wire runs from the power supply to the input on the P-channel mosfet, and the output from the mosfet connects to the Pi’s +5v input. Power is only supplied when the gate on the mosfet is connected to ground. This happens initially using the power button, one end of which is connected to ground. When it is pushed, the ground connects to the gate of the P-channel mosfet and power is supplied to the Pi.

The problem is that this will only keep the system powered as long as the button is held. This is where the upper half of the component, the N-channel mosfet, comes in. This mosfet works opposite of the P-channel, and has a negative input and output with a positive gate. Current only flows when the gate is positive. The positive gate of this mosfet is activated using the TXD pin on the Pi. This pin is typically used for serial data communication, but it has some characteristics that we will make use of here. It’s not the only pin that can be used, it just has a feature enabled by default.

The Pi is now powered on and is stable in that condition.

There is one more feature included in this circuit, and it’s the ability to fully power the system off when the operating system is shut down. The operation is simple. When the OS shuts down it switches the TXD pin back to ground. Since the TXD pin needs to be at 3.3v to power the gate of the N-mosfet (which in turn powers the gate of the P-mosfet), the whole circuit immediately shuts off. The resistors come into play here as well. If they were not in place, the system may not shut off immediately or may not shut off at all. They pull the gates down and up and kill power to everything. The Pi is now powered off and is draining zero power from the power supply or batteries. It can be powered back on immediately by holding the power button again. 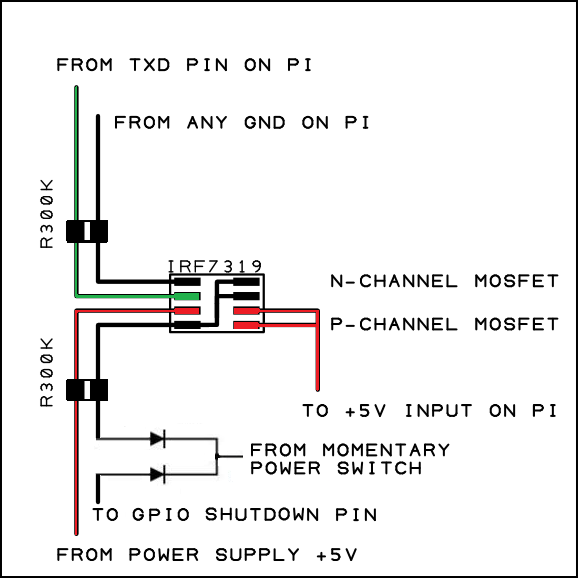 Questions? Comments? Leave a reply or visit the forum.