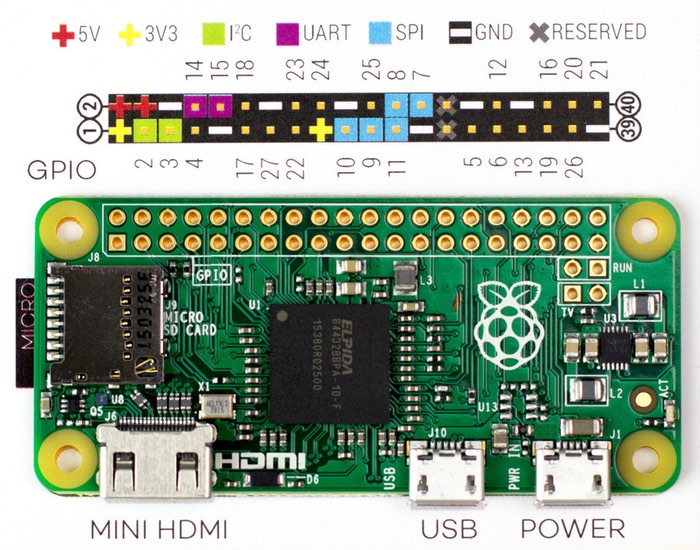 The Raspberry Pi Zero at $5 is a perfect starting point for many projects. We need a way to interface with it though, and it doesn’t make much sense to double or triple that cost with a USB controller. There is a better way using GPIO controls and Adafruit’s Retrogame. 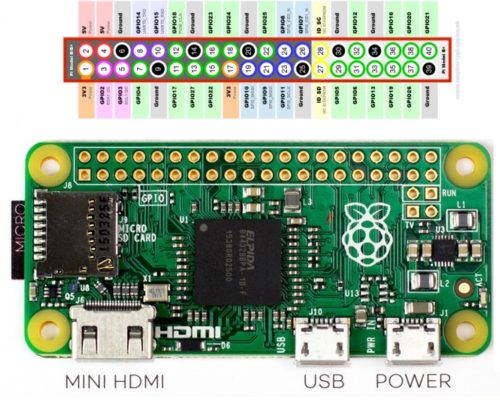 The Raspberry Pi has GPIO pins (the ones colored green in the image to the left), and these pins have many features.

Adafruit’s Retrogame enables one of these features, the pull-up resistors, to detect when a button is pressed and then send a keyboard press to the operating system. When the pull-up resistor is enabled by Retrogame, the assigned pin connects to 3.3v through a small resistor. If you were to put a voltmeter on the pin after configuring Retrogame to use it, it would show about 3.3v.[spacer height=”1px”]

Let’s say we have Retrogame configured to look at GPIO pin 21, and this pin is configured to issue the key ENTER when the button is pressed. Pressing the button connects the pin directly to ground. Since the pin is only pulled up using a small resistor, this resistor is easily overwhelmed by the direct ground connection and the voltage on the pin drops suddenly. Retrogame detects this drop and knows to send the ENTER key to the OS.

Since RetroPie can use keyboard keys to control games, the Retrogame keypresses can be used in Retropie.

This process works in all software, not just RetroPie. The typical use is for gaming though, so that’s the focus of the tutorial.

Before you do anything else, start by downloading and installing Notepad++. You will need it to edit the config files if you want to customize the buttons.

Download the modified Retrogame zip file here and extract it to a folder. Insert your microSD card (with RetroPie or whatever OS you’re using already installed) into your computer. 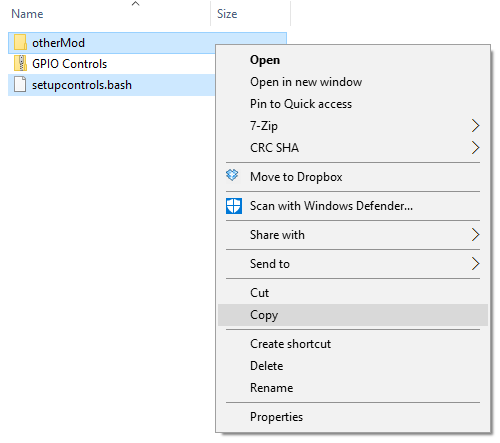 Once extracted, you’re going to see a file (called setupcontrols.bash) and a folder (called otherMod)

Copy both of them. 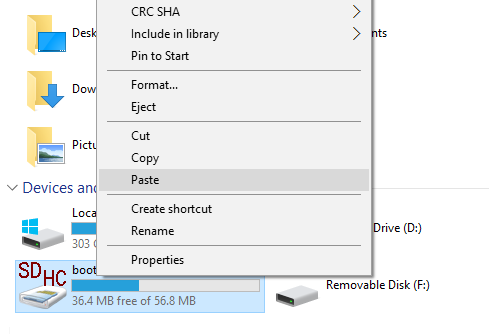 Now paste them into the boot drive that appeared when you inserted the microSD card into your computer.

Now, remove the microSD and insert it into the Raspberry Pi. Boot the Pi into RetroPie or other OS of your choice. If you’re using RetroPie, press F4 on your attached keyboard to exit into the command line.

Now the software need to be installed. To do that, you need to type one command:

Follow the prompts to install. The last step asks whether you want to reboot, hit Y and enter to make it happen. If you are using this on the PSPi 1000 Version 3, then this is all you need to do. RetroPie will ask you to configure the buttons (if you already configured the buttons, use a keyboard to start the process again). You’re done.

If you’re using this for your own custom build, then there are a few more steps. You need to specify the GPIO buttons and the keyboard commands that get issued. It’s time to shut down the OS and put the microSD card back into your computer.

Once the microSD is back in the computer, open the drive Boot and find retropie.cfg

Open this file with Notepad++ and you’ll be greeted with this. Line 13 through 26 are all the custom commands I’ve added to the PSPi configuration. This can be modified to suit your needs though, and it’s not too difficult.

If you have the same basic buttons, and they are attached to different GPIO pins, then just edit the GPIO pin numbers in this config file to match your project. You can also delete lines that aren’t needed or add new ones for additional buttons.

Once you’re finished just save the file and you’re done. The configuration file you edited will get read by Retrogame when you boot the Pi.